United States was accused of backtracking on proposals for missile defense cooperation and of other divisive security issues. 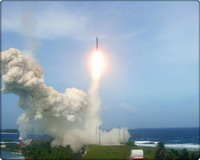 Underlining a deep rift over U.S. plans to deploy missile defense installations in former Soviet satellite states of Central Europe, Lavrov detailed Russian allegations that Washington has gone back on compromises promised when he met with Rice in October.

The United States has withdrawn a proposal for constant Russian monitoring of planned U.S. missile defense facilities in Poland and the Czech Republic, and has rejected the idea of jointly evaluating threats that would trigger activation of the system, he said.

"There has been a serious rollback from what we were told," Lavrov said.

The United States says the installations in the two nations - now NATO members - would counter a looming Iranian threat. Moscow disputes Washington's view of that threat and says it believes the real aim is to weaken Russia.

Putin earlier this year offered an alternative involving joint use of Russian radars and urged Washington to shelve its plans. The U.S. welcomed the offer but pushed ahead with its existing plans while continuing compromise talks with Russia.

"We are, frankly, disappointed," Lavrov said of formal proposals the United States submitted late last month. The proposals "added nothing new to the situation that existed before" the visit by Rice and Defense Secretary Robert Gates, he said.

Lavrov is to meet with Rice and European foreign ministers at a session of the NATO-Russia Council on Friday in Brussels.

Lavrov suggested that in October the United States had said Russian personnel could be stationed permanently at the sites to monitor their operations. The formal proposals, he said, offer only intermittent visits - subject to Polish and Czech approval.

"This is a completely different story from what was proposed to us verbally," he said.

In a nod to Russia's concerns, the United States has offered to hold off activating the missile defense facilities until a concrete threat emerges. But Lavrov said that under the formal proposals, threats would be evaluated "not jointly but by the United States."

"This is a radical contradiction to our approach," he said.

Threats should be evaluated "collectively" by the United States, Russia and any interested European nations, he said - a suggestion that the United States was shutting others out in unilateral pursuit of its own interests.

Putin has increasingly portrayed the United States as a hotheaded threat to global security, while casting Russia as a counterweight committed to collective, peaceful solutions. He told foreign ambassadors last week that no country can have a monopoly on security and that the world must reject the "policy of diktat."

In line with Putin's portrayal of U.S. policy, Lavrov accused the United States of undermining "important" efforts to persuade other countries to submit to a Soviet-era arms treaty that forced Moscow and Washington to scrap medium-range missiles.

At a recent meeting of the Organization for Security and Cooperation in Europe, Lavrov said, the United States rejected a Russian proposal for a resolution urging universal adherence to the Intermediate-Range Nuclear Forces Treaty.

"This of course raises concern, because the situation with medium- and short-range missiles worries many nations," including European Union and NATO members, Lavrov said. His remarks suggested that Washington is blocking a Russian bid to protect Europe from nations that have developed such missiles.

Russia has also accused the United States of hindering efforts to resolve the dispute over Iran's nuclear activities by taking an overly aggressive stance. Lavrov suggested a U.S. intelligence report that said that Iran suspended its efforts to develop nuclear weapons in 2003 justified Moscow's resistance to new sanctions against Tehran.