Vladimir Putin's aggressive campaign to mobilize voter support for his party has made it a near certainty that it will sweep Sunday's parliamentary election. 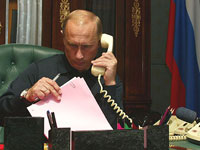 Many Russians, though, say they have found the campaign obtrusive. And this is true not only on the streets of Moscow but in places like Yekaterinburg, a snow-covered industrial city in the Ural Mountains.

While the Kremlin and its allies have worked hard in recent weeks to create the impression that Putin and his party are riding a groundswell of voter enthusiasm, some Russians criticize the governing party's attempt to use Putin's popularity to secure victory.

"It's more of a personality cult than a clever campaign tactic," said Viktor Ishukov, 40, a state energy company employee in Yekaterinburg.

"None of the people I know supports Putin and many have been put off by exactly this obtrusive campaign," he said. "Everyone is sick of it, United Russia is everywhere: in your mail box, on TV, on the radio."

With a population of about 1.5 million, Yekaterinburg is Russia's fourth largest city and is among the country's fastest-developing, with new office and residential buildings towering above old ones.

This historic 18th century city has witnessed some of the grimmest moments in Russian history: This is where the Bolsheviks executed the last czar, Nicholas II, along with his family in 1918. The city, known in Soviet times as Sverdlovsk, was also the site of a deadly 1979 anthrax outbreak that American scientists blamed on an accident at a biological weapons plant.

There were few signs of the election campaign on Yekaterinburg's streets, with only a few billboards advertising United Russia along with other pro-Kremlin parties. Two activists with the liberal Yabloko party stood on a busy commercial street handing out leaflets.

Andrei Khachaturov, Yabloko spokesman in Yekaterinburg, alleged that in recent weeks local officials have harassed the opposition by seizing party newspapers and mobilizing voters for United Russia. Local universities, he said, have scheduled classes for Sunday so they can be certain all their students show up to vote.

"They want to ... legitimize the next parliament because it's likely it will be void of any liberal opposition," he said.

Slava Bozhkov, of the Movement Against Violence rights group, said that his mother was a longtime supporter of United Russia but became disenchanted during the campaign. She was upset with United Russia's eighth party congress Oct. 1, he said, where Putin announced he would lead the party ticket in Sunday's elections.

The congress was reminiscent to many of Communist Party congresses of the Soviet era. "This is a complete return to the past," Bozhkov quoted his mother as saying.

Putin has said a big victory for United Russia would give him the "moral authority" to hold the government and parliament accountable. It could also pave the way for him to return as president in 2012, or sooner if the next elected president does not complete his term. The constitution bars Putin from seeking a third consecutive term in the March 2 presidential election.

Putin and United Russia also have their supporters here. Gyulnara Gyumusheva and Marina Zvereva, 18-year-old law students, said they will vote for the United Russia ticket Sunday. "We support our president," said Gyumusheva. No one, they said, has pressured them into voting for the dominant party.

Retiree Vitaly Kuznetsov, 57, standing at a bus stop, said he would vote for Putin and United Russia as well, although his support was tempered by doubts the president had done all he claimed. "Even though there is still no stability, at least he has slowly started to put things in order," Kuznetsov said.

The former metal worker, who lives on a monthly pension of 3,000 rubles, or about US$125, did not seem to feel his vote counted for much anyway. "In our country, no matter who you vote for, they will anyway put in power someone of their own choice," he said.

Tatyana Repina, 37, a saleswoman in a boutique, said she has not decided which party to support. But she said many of her family and friends have been put off by United Russia's use of Putin's popularity as their trump card in the election.

"It's not honest to use the president as a cover," she said.