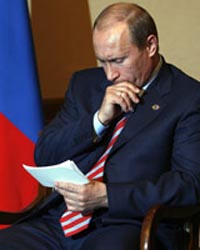 Russia is suspending participation in the Conventional Forces in Europe treaty, as President Vladimir Putin finally signed a law.

The move, although expected, was bemoaned by the United States.

Suspension of the treaty, which limits deployment of tanks, aircraft and other heavy weapons across the continent, takes effect Dec. 12. Under the moratorium, Russia will halt NATO countries' inspections and verifications of its military sites and will no longer be obligated to limit the number of conventional weapons deployed west of the Urals.

The 1990 arms control treaty set limits on the deployment of heavy conventional weapons by NATO and Warsaw Pact countries, to ease tensions along the border between the old Eastern bloc and Western Europe. The treaty was revised in 1999 after the collapse of the Soviet Union.

Putin called for Russia's temporary withdrawal from the treaty amid mounting anger in the Kremlin over U.S. plans to build a missile defense system in Eastern Europe.

Under the conventional forces treaty, "we cannot move an extra tank in our territory," said Sergei Mironov, speaker of the upper house of parliament, according to the ITAR-Tass news agency. "In this sense, we've ceased to be masters in our own territory."

Russian Foreign Minister Sergey Lavrov said that "even after Dec. 12 we will continue the work and seek agreements that would help attain a balance," the Interfax news agency reported.

"This is a mistake. It is Russia unilaterally walking out of one of the most important arms control regimes of the last 20 years," Burns said at an international security conference in Madrid.

Russia announced two weeks ago that it had pulled out the last of its troops based in Georgia. However, questions remain about Russian troops in the separatist Georgian region of Abkhazia.