Russia finally pulls out from Conventional Forces in Europe Treaty 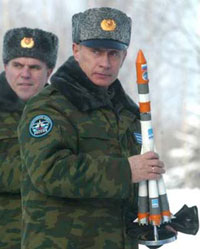 Russia finally pulls out from Conventional Forces in Europe Treaty

The suspension takes effect Dec. 12. Under the moratorium, Russia will halt inspections and verifications of its military sites by NATO countries and will no longer be obligated to limit the number of conventional weapons deployed west of the Urals.

The 1990 arms control treaty set limits on the deployment of heavy conventional weapons by NATO and Warsaw Pact countries, to ease tensions along the border between the old Eastern bloc and Western Europe. The treaty was revised in 1999 after the collapse of the Soviet Union.

Putin called for Russia's temporary withdrawal from the treaty amid mounting anger in the Kremlin over U.S. plans to build a missile defense system in eastern Europe.

The original Treaty on Conventional Armed Forces in Europe (CFE) was negotiated and concluded during the last years of the Cold War and established comprehensive limits on key categories of conventional military equipment in Europe (from the Atlantic to the Urals) and mandated the destruction of excess weaponry. The treaty proposed equal limits for the two "groups of states-parties", NATO and the Warsaw Pact.

The Treaty was signed in Paris on November 19, 1990 by 22 states. The CFE Treaty sets equal ceilings for each bloc (NATO and the Warsaw pact), from the Atlantic to the Urals, on key armaments essential for conducting surprise attacks and initiating large-scale offensive operations. Collectively, the treaty participants have agreed that neither side may have more than:

The treaty further limits the proportion of armaments that can be held by any one country in Europe to about one-third of the total for all countries in Europe - the "sufficiency" rule. These limits are:

World
Henry Kissinger: There are three possible outcomes of the Ukraine crisis