Mikhail Trepashkin, a former KGB agent who warned Alexander Litvinenko of the alleged death squad was released from prison. 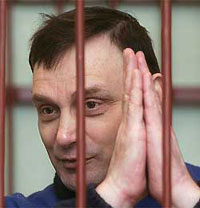 Mikhail Trepashkin, who investigated allegations that the Federal Security Service, the KGB's main successor agency, was involved in a series of 1999 apartment house bombings, walked out of the prison in Nizhny Tagil about 1,500 kilometers (900 miles) east of Moscow, lawyer Sergei Kuznetsov told The Associated Press.

Trepashkin was arrested in October 2003 on charges of illegal weapons possession and later convicted of divulging state secrets.

He was arrested days before he was scheduled to testify in a trial on the 1999 apartment house bombings in Moscow and other Russian cities that authorities blamed on Chechen separatists. The bombings were among the justifications cited by Russia for resuming full-scale war in Chechnya , but some critics alleged they were staged by the security service, known by its initials FSB.

Litvinenko, also a former security service agent, fled to Britain in 2000 and co-authored a book blaming the security service for the bombings. Litvinenko was killed in London last year with a dose of the rare radioactive isotope polonium-210.

From prison, Trepashkin wrote that FSB officers possessed poisons that could be applied to a car's steering wheel, door handles, telephone receivers and elsewhere - some of which would not leave a trace in the victim's body.

Trepashkin wrote that an FSB colonel met with him in August 2002 and asked him to join a group targeting Boris Berezovsky, a self-exiled Russian tycoon living in London, and Litvinenko. He said he had warned Litvinenko himself of the alleged death squad.

Trepashkin said he refused to cooperate with the team, whose task was to "mop up" Berezovsky, Litvinenko and their accomplices.