Moscow can deploy missiles in Belarus to prevent US defense plan 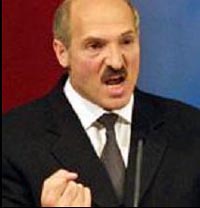 Moscow can deploy missiles in Belarus to prevent US defense plan

Col.-Gen. Vladimir Zaritsky, the chief of artillery and rocket forces for the Russian Ground Troops, said that "any action meets a counteraction, and this is the case with elements of the U.S. missile defense in Poland and the Czech Republic," the ITAR-Tass news agency reported.

Russia has fiercely opposed U.S. plans for 10 missile interceptors in Poland and a radar in the Czech republic. President Vladimir Putin and other officials have warned that Russia could target the planned U.S. defense sites in Europe with its missiles.

Putin has dismissed U.S. claims that the sites were intended to provide protection from a missile threat from Iran and has said they would weaken Russia's nuclear deterrent.

Zaritsky was responding to his Belarusian counterpart who said that Russia could provide Belarus with its new short-range Iskander missiles. "Why not? Given adequate conditions and an adequate Belarusian opposition," Zaritsky said.

Belarus' authoritarian President Alexander Lukashenko, a pariah in the West for his relentless crackdown on dissent and free media, has relied on Russia's support and the two nations have developed close political and military ties.

Zaritsky said that Iskander missiles can strike targets at ranges between 300 and 500 kilometers (190 to 310 miles).

The deployment of Iskander missiles in Belarus, which borders Poland, would likely put planned U.S. missile defenses there within range; a site in the Czech Republic would likely be out of reach.

Russian news reports also quoted Zaritsky as saying that Iskander's range could be extended if Moscow decides to opt out of a Cold War-era treaty which banned intermediate-range missiles.

Putin and other officials have warned that Russia could pull out of the Intermediate-Range Nuclear Forces (INF) Treaty, a landmark document signed by Soviet leader Mikhail Gorbachev and U.S. President Ronald Reagan in 1987 that banned the entire class of medium-range missiles.

"Iskander complies fully with conditions of the INF Treaty, but if a political decision is made to withdraw from the treaty, we will improve its capability, including range," Zaritsky said. "Whatever the Motherland has to say."

The statements from Zaritsky follows the Russian parliament's vote last week to suspend Moscow's participation in the Conventional Forces in Europe treaty, a key arms control treaty limiting the deployment of tank, aircraft and other heavy conventional weapons across the continent.

Putin announced the intention to halt its obligations under the treaty pointing at NATO's failure to ratify its amended version.

The legislation still needs approval in the upper house, which is a virtual certainty, before it goes to Putin for his signature. It would take effect Dec. 12.