At its meeting in the organization's headquarters in Brussels, Defence ministers of member countries of the North Atlantic Treaty Organization (NATO) began on Wednesday (8th) to discuss the cutting of the body's barracks and military operation in Libya. 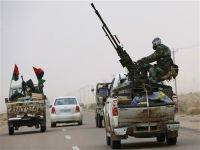 The secretary general of NATO, Anders Fogh Rasmussen, will insist on his demand that the countries send more resources and allow more flexible use of existing employees.

The defense minister of the United Kingdom, Liam Fox, whose country, along with France, has provided helicopters for combat operations in Libya, led by NATO, supported the request by Rasmussen. "We want to see greater urgency in some capitals," Fox said. "NATO believes that the government of Moammar Gaddafi in Libya is coming to an end, so that the discussion on Wednesday focuses on the preparation for what NATO calls "post-Gaddafi."

The reform of NATO's military structure intends to reduce the number of headquarters staff from 11 to seven. Late on Wednesday during a working dinner, the NATO Secretary General will present to ministers a detailed proposal of their plan and expects to receive the full support of Member States.

Diplomats from several NATO member countries have shown caution about the chances of success for the Secretary-General's proposal. "The theme is very green. It is not clear whether it will be approved," said one European diplomat.

NATO is an aggressive military alliance that runs the militaristic and warmongering policies of U.S. imperialism and its European allies.