Adoption of the Convention on Forced Disappearance is essential to ensu 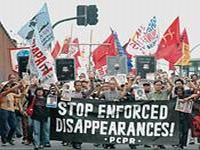 The representative to the Chamber, Iván Cepeda Castro, will sustain on Tuesday, the 5th of October, before the Second Constitutional Commission of the Chamber the Project of Law No. 303/10 in the Chamber and 209/09 of the Senate, by which it adopted the International Convention for the Protection of All Persons from enforced disappearances. The above mentioned convention was adopted in New York on December 20, 2006.

"Since the last decade, thousands of people have been victims of crimes against humanity, specifically of enforced disappearance in Colombia. The adoption of the Convention is of great importance for human rights advocates, for society and for victims of crime," said Representative Cepeda Castro.

International law considers that enforced disappearance is one of the most serious violations of fundamental rights and an "affront to human dignity" and therefore the adoption and ratification of this Treaty constitutes a fundamental contribution to the strengthening of justice, prevention of this crime and the fight against impunity.

The convention is the first international instrument that recognizes the rights to truth, justice and full reparation to all victims of enforced disappearance. If approved by Colombia, it will become the twentieth State to ratify it. It would take effect, assigning a high relevance to proceedings instituted before the House of Representatives of the Congress of Colombia.

The support for this project will be provided with the presence of Christian Salazar Volkmann, Representative of the Office of the High Commissioner for Human Rights in Colombia, and the vice president, Angelino Garzón, ambassadors of Argentina and France, representatives of the International Red Cross, relatives of missing persons and spokesmen for several organizations of victims and human rights defenders will be invited.

Another Colômbia is possible ...!!