Letter to the Israeli Government 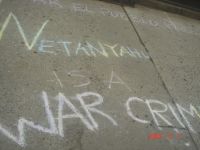 Letter to the Israeli Government

Sirs who embarrass me:

Jews have been identified with the best humanistic traditions of our culture by the media, and I am deeply ashamed of what successive Israeli governments have been doing to disrupt peace in the Middle East. The initiatives against peace taken by the government of Israel have been making daily survival in Israel and Palestine increasingly unbearable.

For too long, I have felt ashamed of the indecent occupation practiced by Jewish settlers on Palestinian territory. Now to claim the bombing of the Turkish-flagged ship that carries food to our Palestinian brothers was seditious? Shame, three times shame!

I suggest that Simon Peres return his Nobel Peace Prize and apologize for having accepted it after having armed apartheid South Africa.

I believe the current government, all of its members, without exception, are worthy by universal consensus of the Jim Jones Award for leading all parents to collective suicide.

If the genocidal policy of the current government continues, not even the good ones will survive and Israel will perish under the contempt of the whole world ..

Mr, Lieberman, who brought with him his vast experience with native Moldovan pogroms, is firmly committed to apply it against our Palestinian brothers. This deserves justice in a Nuremberg court.

I say all this because a Jewish humanist cannot watch in silence and indifference to what is happening in the Middle East. We need strength and courage, united with the good, struggling for fraternal coexistence between two sister nations.

Silvio Tendler is a filmmaker