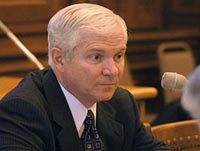 China said that U.S. Defense Secretary Robert Gates would visit the Asian nation to boost trust between the countries' militaries.

The trip comes as U.S. officials have voiced concern about China's rising military might while also calling for more engagement.

"We believe that the visit by Gates is a big event between the two militaries this year," Liu said.

"China attaches great importance to that and we hope the visit can be good for the improvement of the mutual understanding and trust of the two militaries," he said.

China and the United States have stepped up military exchanges recently, but the U.S. and countries such as Japan and Australia have also called on Beijing to be more open about its military plans.

Buoyed by its booming economy, China raised its military budget by 17.8 percent to 351 billion yuan (US$44.94 billion; EUR32.79 billion) this year, the largest annual increase in more than a decade.

The Pentagon says China's real defense spending may be much more, because the official budget doesn't include major weapons purchases and other items.

Still, Chinese military spending is far less than America's, and its military is poorly equipped compared to the U.S. or Japan.

Last month, Chinese President Hu Jintao said in a keynote speech at the opening of a twice-a-decade Communist Party Congress that he was committed to making China's military more modern.

China's sprawling military will speed up its modernization over the next five years, increasingly adopting high-tech battle systems and upgrading training.

Hu's comments have additional weight because he is also the head of the party commission that controls the People's Liberation Army, the world's largest standing army with 2.3 million members.

He did not give details on the modernization plans.