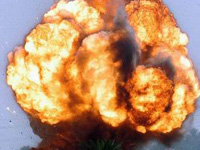 Five people were killed near shelter used as a police recruiting center in northeast Baghdad in a roadside bomb explosion on Thursday.

The explosion went off at around 9:20 a.m. on a road leading to an Interior Ministry building used to process police recruits in the Shiite-dominated neighborhood of Binouk, police said.

Six other people were wounded, they said. Most of the victims were recruits lining up outside the shelter.

Northeast of the capital, another roadside bomb exploded near a convoy carrying the police chief of Balad Ruz, Col. Faris al-Amirie, police said. Four of al-Amirie's guards were killed, but the chief escaped injury, they said.