Scores of evacuees returned back to neighborhoods devoided of trees and houses Friday, though the wildfires that ousted them kept on to threaten some parts of Southern California. 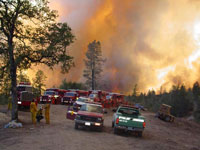 The football stadium where more than people 10,000 people sought refuge emptied rapidly and was to close later in the day.

Thousands of people lost their homes this week to the wildfires that left an arc of destruction from Ventura County just north of Los Angeles to the Mexican border.

"I've lost my history," said Robert Sanders, a 56-year-old photographer who returned to a smoldering mound that once was his rented house in the San Diego neighborhood of Rancho Bernardo.

Among the possessions he lost to the flames and withering heat were his transparencies, melted inside a fire-resistant box, and a photograph of his father.

Of the 1,800 homes lost so far, 80 percent were in San Diego County. The property damage there alone has surpassed $1 billion (Ђ700 million).

Meanwhile, several fires continued to burn out of control Friday.

Among the structures threatened Friday was the landmark Palomar Observatory. Crews were clearing brush and lighting back burns around the observatory, said Fred Daskoski, a spokesman for the California Department of Forestry and Fire Protection.

The observatory, home to the world's largest telescope when it opened in 1908, did not appear to be in immediate danger, said observatory spokesman Scott Kardel, who had been evacuated but was in contact with staff who remained.

To the southeast, the Witch Fire, which already has destroyed more than 1,000 homes, was churning its way toward Julian. The town of 3,000, nestled in the rolling hills of a popular apple-growing region, was under mandatory evacuation.

East of San Diego, firefighters also were trying to keep flames from Lake Morena, which is surrounded by hundreds of homes.

"Until you get a control line around each and every individual fire, there's a potential of them blowing out anywhere," Daskoski said.

As the governor and president witnessed the devastation, the state came under criticism for failing to deploy sufficient aerial support in the wildfires' crucial first hours.

The Navy, Marine and California National Guard helicopters were grounded for a day partly because state rules require all firefighting choppers to be accompanied by state forestry "fire spotters" who coordinate water or retardant drops. By the time those spotters arrived, the high winds made it too dangerous to fly.

Additionally, the National Guard's C-130 cargo planes were not part of the firefighting arsenal because long-standing retrofits have yet to be completed. The tanks they need to carry thousands of gallons of fire retardant were promised four years ago.

The wildfires are directly blamed for killing three people, a 52-year-old man in Tecate along the Mexican border and a couple in Escondido. Their bodies were discovered in the charred remains of their hillside home.

Border Patrol agents also found four charred bodies in what was believed to be a migrant camp east of San Diego, near the Mexican border. Medical examiners were trying to determine their identities and whether they had died in a fire that destroyed almost 100 homes.

In Orange County, local authorities, the FBI and the Bureau of Alcohol, Tobacco and Firearms were investigating a fire that destroyed 14 homes. It was believed to be started by an arsonist.

Even as evacuees returned home and fire crews began mop-up duties in some areas, the wildfires continued to threaten homes in others.

An aerial assault was helping firefighters corral two blazes in the San Bernardino Mountains east of Los Angeles, a thickly wooded resort area where 313 homes have been lost.