No one noticed that a 13-year-old Kansas student carried a homemade bomb in his backpack for two weeks around his middle school. 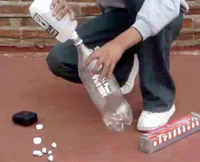 Police said the device, which measured about 5 inches (13 centimeters) long and was less than an inch (2.5 centimeters) in diameter, was made out of metal casings filled with pieces of a fireworks sparkler that had been ground into powder. The bomb had a fuse taped to one end.

"Anyone standing in close proximity would have been injured," Nelson said.

The bomb was found Wednesday afternoon at Brooks Technology and Arts Magnet Middle School in Wichita. Another student saw it and showed it to his father, who took it to school administrators.

A police bomb squad disposed of the device.

The student who brought the device to school did not threaten anyone, police Capt. Terry Nelson said.

No formal charges had been filed against the student, and the boy's motive for making the device is unknown, said Gordon Bassham, a police spokesman.