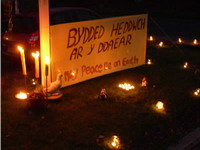 A train struck an American tourist in Cape Town.

Police spokesman Captain Elliot Sinyangana told the South African Press Association that the train hit the man while he was taking photographs at 2 p.m. (1200 GMT).

The incident happened at the picturesque St. James railway station near the popular seaside suburb of Muizenberg. The man was reportedly standing on the railway tracks which run alongside the scenic False Bay coastline. It is thought he may not have heard the approaching train over the din of crashing waves.

Sinyangana said the man's relatives had not yet been informed.

No further details were available and an official at the U.S. embassy in Pretoria said the matter was been handled by the consulate in Cape Town.