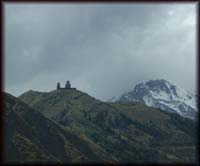 Eight people were injured by an explosion caused by a bomb courier who accidentally blew up a taxi in Dagestan, Russia, killing herself.

The blast occurred after the woman put the bag holding the explosive material onto the floor of the minibus taxi, said Saidulla Batdalov, an official from an investigative committee in Dagestan.

The woman died immediately and eight other passengers were injured. Three were hospitalized, Batdalov said.

The woman was likely a courier, and the blast occurred due to mishandling of the explosive material, Batdalov said. It was not immediately clear where the woman had intended to transport the bomb.

The blast occurred several hundred meters (yards) from a police station in the Kazbek district. The minibus had been traveling from Khasavyurt to Dylym, a regional police spokesman said.

Dagestan, a southern region near the Caucasus Mountains, is plagued by violence connected with criminal activities and with insurgent activity that has spread from neighboring Chechnya.