Firemen struggled to combat the fire that rapidly engulfed the region of Southern California. The fires that were fanned by fierce desert winds killed one and forced thousands to evacuate. 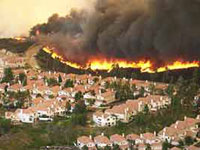 In many cases, crews could not begin to fight the fires because they were too busy rescuing residents who refused to leave, fire officials told reporters in the San Diego area.

Several new fires sprouted overnight, adding to about a dozen blazes that have already burned 40,000 acres (16,188 hectares). The fires, which covered swaths of drought-parched land from the high desert to the Pacific Ocean, inflicted some of the worst damage in Malibu, where a church, homes and a castle were charre d.

Firefighters acknowledged they were overwhelmed, and Governor Arnold Schwarzenegger declared a state of emergency late Sunday in seven counties.

One person died in a fire near San Diego, which burned more than 14,000 acres (5,666 hectares) about 70 miles (113 kilometers) southeast of San Diego, just north of the Mexican border town of Tecate, California Department of Forestry spokesman Matt Streck said.

Four firefighters and at least 10 other people were hospitalized, Streck said. Some of the injured were hikers, and others may be illegal immigrants.

Another blaze devoured more than 5,000 acres (2,023 hectares) in northern San Diego County and forced the evacuation of the community of Ramona, which has a population of about 36,000.

Several structures were burned on the edge of town and sheriff's deputies called residents to alert them the fire was approaching the city, said San Diego sheriff's Lt. Phil Brust.

"The winds are up, it's very, very dangerous conditions," San Diego County spokeswoman Lesley Kirk said. "Fires are popping up all over the place."

Several new wildfires broke out in San Diego County early Monday, officials said, and at least seven blazes were active in the county. Kirk said fire crews were stretched thin and were anxiously awaiting reinforcements from other parts of the state.

A wildfire in Orange County that grew to 8,800 acres (3,561 hectares) was believed to be arson, Orange County Fire Authority Lynnette Round spokeswoman said. It was 30 percent contained.

In Malibu, about 700 firefighters worked to protect hundreds of homes in several upscale communities nestled in the hills. About 1,500 people were evacuated and the blaze destroyed a church and several homes, one of them the landmark Castle Kashan, a stately fortress-like home with turrets and arched windows. Chunks of brick fell from the exterior of the burning building overlooking the coast.

The castle belonged to Lilly Lawrence, the daughter of a former Iranian oil minister. She said she was able to gather a few things before the fire engulfed her home, including some jewelry and memorabilia that included Elvis Presley's Army fatigues.

She did not seem too worried about losing most of her belongings in the fire.

"My parents taught me not to allow my possessions to posses me," Lawrence told KABC-TV. "So, that's the story. The house is a house."

Winds carried embers across the Pacific Coast Highway, closing the popular road and setting fire to cars and trees in the parking lot of a shopping center where a supermarket, drug store and other shops were damaged.

"This fire is zero percent contained, which means we're at the mercy of the wind," acting Malibu Mayor Pamela Conley Ulich said.

The fire is expected to burn for another two to three days, he said. Until the blaze is extinguished, "there will literally be thousands of homes that will be threatened at one time or another," he said.

The fire may have been started by downed power lines, Capt. Mike Brown said.