Brown: Turkey must engage Iraq in talks on Kurdish rebels 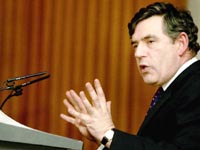 Brown: Turkey must engage Iraq in talks on Kurdish rebels

Turkey should be patient in response to a deadly weekend attack by Kurdish rebels, Prime Minister Gordon Brown said Monday.

Turkey has threatened to send its military across the Iraqi border to fight Kurdish rebels based in the north of the country.

"I think the government's general position is that the PKK is trying to undermine the Turkish government's efforts to improve the situation of the people in the southeast of the country and to provoke conflict between Turkey and Iraq and damage regional stability," Ellam said.

"It is the government's position that we encourage the Turkish government to continue to seek a solution through dialogue with the Iraqi government," Ellam told reporters.