Exxon Mobil refinery was rocked with explosion early Wednesday. No one was injuried and no risk to the public. 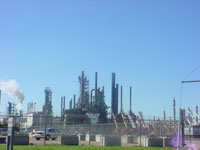 A fireball shot into the sky at about 6:18 a.m. at the refinery in Lockwood and dissipated after about two minutes, The Billings Gazette reported on its Web site. Some refining operations continued at the plant even as Exxon Mobil firefighters continued to work on putting the fire out, said company spokeswoman Pam Malek.

Malek said some units at the plant had been scaled back, but could not provide an estimate of the refinery's current capacity. The plant normally refines about 60,000 barrels of oil a day.

The explosion occurred in a processing unit after piping in a high-pressure unit leaked gases that ignited, although an exact cause had not been determined. No one was in the area at the time, Geoff Craft, the refinery's general manager, told The Billings Gazette.

Lockwood and Billings fire departments also responded to the scene but served mostly as a backup in case of injuries, Malek said. The Lockwood Fire Department said the fire was under control about 20 minutes after the blast.