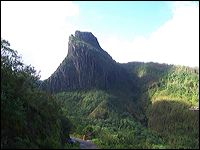 One of the most dangerous volcatos of Indonesia was poised to erupt. Villagers were evacuated from the mountain’s slopes.

Mount Kelud, which has been rumbling for weeks, was placed on the highest alert level, meaning scientists believe a major eruption is imminent, said a posting on the government-run volcanology center Web site.

The status requires local authorities to evacuate people living on the slopes.

Kristianto, a scientist monitoring Kelud, told Metro TV that all people living within 10 kilometers (6 miles) of the peak must evacuate. Kristianto goes by a single name.