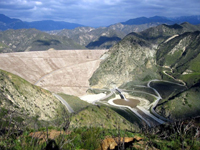 The quake occurred at 1:53 a.m. (0853GMT) and was centered about 3 miles (5 kilometers) north of Wrightwood, a remote community about 80 miles (130 kilometers) northwest of Los Angeles, the U.S. Geological Survey said on its Web site.

The quake was strong enough to wake people as far away as the north Los Angeles suburb of Glendale.

Bonnie Curtis, a dispatch supervisor with the San Bernardino County Fire Department, said there were no immediate reports of damage or injuries.