Man who filmed himself raping little girl arrested in USA

The U.S.police arrested Chester "Chet" Arthur Stiles, the man accused of videotaping himself while raping a 3-year-old girl. Stiles, 37, had been in a nationwide search since police identified him as the man who allegedly raped and sexually assaulted a girl in a homemade videotape that surfaced last month in the Nevada town of Pahrump. 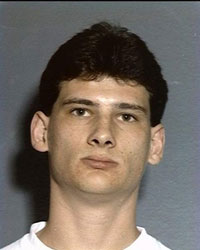 Man who filmed himself raping little girl arrested in USA

He was arrested Monday night in Henderson, just outside Las Vegas in the U.S. state of Nevada, police said at a news conference. Henderson police officer Mike Dye said he stopped Stiles on a busy thoroughfare. He said Stiles was driving a white sedan with no license plates, and provided an expired California drivers license with a photo that Dye said looked "suspicious."

"The picture on the license didn't quite match the gentleman in the vehicle," Dye said. After further questioning, the officer said Stiles revealed his true name. "He said I'm Chester Stiles, the guy you're looking for," Dye said. "He said I'm tired of running."

Dye said Stiles cooperated and did not resist. Dye called for backup, and another officer arrived to handcuff Stiles. Las Vegas Police Capt. Vincent Cannito said Stiles has been wanted since Oct. 5 on warrants issued for 21 felony charges in connection with the acts seen on the videotape, including lewdness with a minor, sexual assault and attempted sexual assault.

Stiles was alone in the vehicle and unarmed, but police have not fully searched the car, Cannito said. Police were awaiting a warrant. Stiles was being booked at the Clark County jail. He had not yet hired a lawyer or been assigned a court date, police said. Cannito said police were continuing the investigation. "We don't know if we're going to find any other victims," Cannito said.

The girl in the videotape was found with her mother in Las Vegas on Sept. 28. Now 7 years old, she has been described as happy and healthy, with no memory of the 2003 encounter with Stiles. Authorities had sought the public's help in finding Stiles, who was wanted on state and federal warrants in a case in which he was alleged to have groped a 6-year-old girl in 2003.

Police were also looking into an allegation that he had sexually assaulted a young girl in 2001. Police say they had received hundreds of tips about Stiles, who they had called dangerous and possibly armed. Stiles had previously been arrested on charges including assault, battery, resisting a police officer, auto theft, leaving the scene of an accident and contempt of court, authorities said.

He was convicted in 1999 in Las Vegas of carrying a concealed weapon, and in 2001 of conspiracy to commit grand larceny. He pleaded no contest in Houston in 1993 to unlawful carrying of a weapon. Nye County District Attorney Bob Beckett said others have characterized Stiles as a "survivalist type" who claimed to have weapons, a Navy SEAL background and who always carried a knife.

The man who turned the tape in, Darrin Tuck, 26, was arrested last month on a probation violation charge, and was likely to face pornography charges, Beckett said.