At least nine killed in car accident in central Russia

A minibus and a truck collided in Russia's central region early Tuesday. At least nine people were killed in the accident, seven others were seriously wounded. 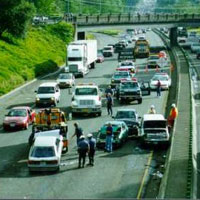 At least nine killed in car accident in central Russia

He said the circumstances of the crash were not immediately clear, but that nine people died on the spot. Another seven were hospitalized.

Fatal road accidents are frequent in Russia, where many drivers do not observe the driving rules, few wear seat belts and roads are often poorly lit and poorly maintained, especially in the provinces. Alcohol abuse among drivers is also common.

Adding to the problem is the wide use of minibuses, which supplement public transport in many places. Most are often packed with passengers and lack seatbelts, making them more dangerous.