Three children and nine adults drowned Monday. They had a picnick on a beach near Karachi, main port city on the Arabian Sea. 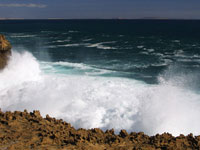 Strong waves struck a group of 15 picnickers who had waded far into the sea at the Gadani beach about 40 kilometers (25 miles) southwest of Karachi, police officer Abdul Jabbar said.

Twelve people drowned while two others were pulled safely from the sea by rescuers. The death toll rose from 10 after rescuers retrieved the lifeless bodies of two men who were reported missing earlier, Jabbar said.

Those drowned included three children between the ages of 12 and 13, he said.

The beach was crowded with people celebrating Eid, the holiday that ends the Muslim fasting month of Ramadan.

The beaches near Karachi are crowded on holidays but picnickers often disregard warnings not to wade or bath in the sea. The picnic spots have inadequate safety facilities such as life guards.