Five people were wounded  in the explosion believed caused by a bomb at a guest house in the Myanmar border town of Myawaddy.

Col. Photsawat Tangchui, a police chief in Thailand's border district of Mae Sot - across the Moei River from Myawaddy - said that a bomb exploded in a room at the Shwebyisaya Guest House, located near the Thai-Myanmar Friendship Bridge linking the two countries. 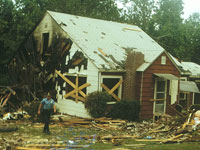 Myanmar explosion (hyperphysics.phy-astr.gsu.edu)
But a Myawaddy resident interviewed by phone said five people were injured by the blast. The resident, who insisted on anonymity for fear of harassment by the authorities, said police interrogated all the lodgers at the guest house and held four for further questioning.

Maj. Gen. Surachet Chaiwong, the Thai army commander for Mae Sot, said a Myanmar counterpart told him that a cooking gas tank at a small hotel had exploded, injuring one person.

There was no immediate evidence linking the incident to the pro-democracy protests in other parts of Myanmar that have been suppressed by the ruling military.