An alligator that killed an elderly Canadian woman in the U.S. state of Georgia has been captured in the pond where passers-by found the woman's last weekend, police said. 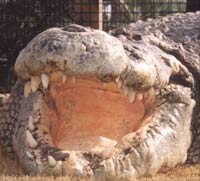 The Georgia Department of Natural Resources sent Douglas to hunt for the reptile after an autopsy confirmed 83-year-old Gwen Williams died from blood loss caused by an alligator attack.

A couple found her body - missing its left arm, right hand and right foot - in the pond Saturday near the home where Williams was house-sitting for relatives. Police said Williams was from Canada, but did not know which city.

Douglas confirmed the captured alligator was the one that attacked Williams by cutting it open to examine the contents of its stomach, police said.

Williams was the first person known to have been killed by an alligator in Georgia since 1980, said Jim Simmons, a senior wildlife biologist for the Georgia Department of Natural Resources.