Rescue workers pulled another five bodies from a Bangladesh river on Tuesday, taking the death toll from two boat accidents to seven, police said. Another 20 people were missing, feared dead. 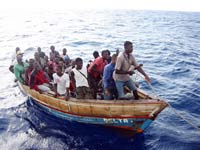 The motorized wooden boats, carrying about 25 people each, sank Monday after they were caught in a violent storm on the Meghna River, 40 kilometers (25 miles) east of the capital, Dhaka.

The remaining passengers were able to swim to shore, he said.

A weather depression brewing in the Bay of Bengal triggered rainstorms and heavy downpours across the country Monday, prompting weather officials to warn craft to stay near shore.

Several river ferry services were also suspended, stranding hundreds of vehicles with passengers on their way home ahead of a religious festival, the ATN Bangla television network said.