Poland's ambassador to Iraq was wounded and one civilian was killed in the recent car bomb attack in Iraq. 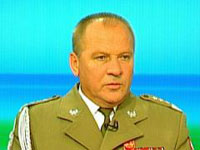 Gen. Edward Pietrzyk was taken to a U.S. military hospital, Polish foreign ministry spokesman Robert Szaniawski said, adding the ambassador was moving on his own, which meant his injuries were most likely not life-threatening.

A civilian passer-by died after the parked car bomb was detonated about 10 a.m., according to an Iraqi police official who spoke on condition of anonymity because he was not authorized to release the information.

Four people, including a security guard with the convoy, also were wounded in the attack in Karradah in downtown Baghdad, police said.

Pietrzyk was commander of Polish troops in Iraq until 2004 when he was appointed ambassador, Szaniawski said.

Poland, a staunch U.S. ally, contributed combat troops to the 2003 U.S.-led war in Iraq, and has since led a multinational division south Baghdad. About 900 Polish troops are currently stationed there training Iraqi personnel.

Last year, the Polish government extended its mission in Iraq until the end of 2007, leaving a decision on further extensions for later this year.