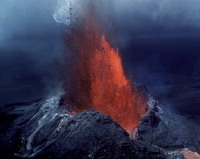 The eruption began Sunday evening on Jabal al-Tair, an oval island about two miles across that is unpopulated except for a small Yemeni military base used for naval control of nearby shipping lanes.

The eruption collapsed part of the island, which is about 113 kilometers (70 miles) off the Yemeni coast, and covered the rest with lava, forcing authorities to evacuate the base, the Yemeni news agency SABA reported.

Lava and ash, which shot hundreds of feet into the air in the initial eruption, continued to spew from the volcano Monday, the Yemeni Defense Ministry said.

A six-ship NATO fleet sailing toward the Suez Canal at the time was asked by Yemen to assist in the search and found two survivors, as well as the four bodies, said Cmdr. Stuart Moors of the Canadian navy who was aboard the USS Bainbridge, in an interview with The Associated Press.

The Yemeni coast guard and navy had earlier evacuated 21 personnel from island base, Moors said.

Yemeni military officials, though, said 47 people were evacuated from the base, including two with serious injuries, and were admitted to a military hospital in the port city of al-Hudiadah. The officials spoke on condition of anonymity because they were not allowed to speak to the media.

"We're still searching" for the other two missing Yemenis, Moors said from the Bainbridge, which is based in Norfolk, Va., and is the flagship of the NATO fleet.

"As soon as we found these people, we offered to remain and assist. We have continued our search through the day and we're remaining in touch with Yemen authorities," he said.

It was not clear whether the victims were killed by the eruption or by drowning.

The two rescued men were turned over to the Yemeni coast guard, Bainbridge said.

One of the survivors who was found by the Bainbridge reported being in the water for more than 12 hours, and "he was in quite good shape, considering the hardship."

He had no information on the other survivor, who was picked up by the HMCS Toronto.

Canadian navy spokesman Ken Allen, who was aboard the Toronto, said the eruption was "catastrophic."

On Sunday evening, he reported that the entire island "is aglow with lava and magma as it pours down into the sea."

"The lava is spewing hundreds of feet into the air, with the volcanic ash also (rising) a thousand feet in the air," he said in an e-mail from the ship.

Sailors on Monday could hear "what sounded like popping noise from the lava going up in the air, and you could see big steam plumes and smoke," Moors said.

Yemeni President Ali Abdullah Saleh toured the volcanic island by helicopter on Monday and then visited the military hospital where the wounded were taken, the Yemeni military officials said.

Jabal al-Tair - meaning "Bird Mountain" - is one of a number of volcanos at the southern end of the Red Sea in the narrows between Yemen and Sudan. The island last saw an explosive eruption in 1883, according to the Washington-based Smithsonian Institute's Global Volcanism Program.

In the past two weeks, the area around the island had seen light earthquakes between magnitude 2 to 3.6, with three larger ones Sunday reaching magnitude 4.3, the Yemeni Ministry of Oil and Mineral Resources said, according to SABA. Fishermen and other boats had been warned from approaching the area, it said.

Yemen is a poor tribal Sunni Muslim country at the southern tip of the Arabian Peninsula.