Five cases of killing Iraqi civilians by private Blackwater USA security guards are at the core of a U.S. review of how the hired protection forces guard diplomats in Iraq, U.S. officials say. 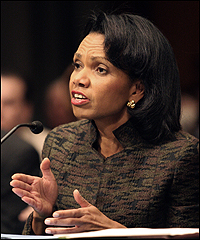 Iraqi authorities also are angry about a sixth incident in which Blackwater guards allegedly threw frozen bottles of water at civilian cars and broke their windshields. No one was killed.

The United States has not made conclusive findings about the incidents, which include a Sept. 16 case in which at least 11 Iraqis died. A State Department official said investigators are not aware of others. The official spoke Friday on condition of anonymity because the inquiries are in progress.

The United States is conducting several inquiries spawned by the deadly Baghdad shooting this month involving the private security contractor that protects U.S. diplomats and others in Iraq.

The Sept. 16 killings outraged many Iraqis, who have long resented the presence of armed Western security contractors they consider an arrogant mercenary force that abuses Iraqis in their own country.

Blackwater is the largest of three private companies contracted by the State Department to provide security for U.S. diplomats in Iraq.

The State Department has counted 56 shooting incidents involving Blackwater guards in Iraq this year. All will be reviewed as part of a comprehensive inquiry ordered by Secretary of State Condoleezza Rice, but the five fatal shootings involving Iraqi civilians are paramount, two officials said.

Rice announced Friday that she has brought in outside military, diplomatic and security advisers to help guide the inquiry.

"My instructions to the panel are simple," Rice said. "Their review should be serious, probing and comprehensive. Once they have established baseline facts, I look forward to hearing their recommendations on how to protect our people while furthering our foreign policy objectives."

Led by Patrick Kennedy, the State Department's director of management policy, the panel will present an interim report by Oct. 5 and a fuller assessment later.

As of last week, Blackwater had protected U.S. diplomatic convoys in and around Baghdad 1,873 times this year, accounting for more than half the total number of such escorted trips in Iraq, the State Department said. Guards fired 56 times.

Kennedy told reporters Friday the State Department has not been slow to investigate the actions of contractors.

"We monitor and supervise this contract and its personnel very seriously," Kennedy said.

He said his review will cover the rules and procedures for security contractors in Iraq, but he indicated there is little real alternative to continuing to use hired security help.

The five incidents involving civilians were previously identified by Iraqi authorities, who are also looking into whether the shootings were out of bounds.

Separately, Defense Secretary Robert Gates has sent a fact-finding team to Baghdad to investigate conditions involving private contractors working for the Pentagon and to consult with military officers there.

Meanwhile, a top aide to Gates' No. 2 general in Iraq told reporters Friday that he has seen private security guards "overreact" but stressed that security contractors fill a vital role.

"Are they quicker with the trigger? Are they quicker to wave a weapon, brandish a weapon, other tactics, cutting people off?" asked Brig. Gen. Joseph Anderson, chief of staff for Iraq No. 2 commander Lt. Gen. Ray Odierno. That's a "tough assessment," he said.

"I have seen them, in my opinion, overreact, but that does not mean it's consistently the case," Anderson said. He spoke to a Pentagon press conference by video from Baghdad.

"I can certainly say I've seen them do some tactics that I thought were over the top. But that's something we've got to keep working out, what their reason, what their rationale was for that, what kind of procedures are going to follow in this country to make sure we don't have incidents like occurred last week."

There are not enough uniformed military to perform all the jobs that the Iraq war requires, and several companies provide contract workers to wash clothes, drive trucks and a host of other tasks.

American witnesses, including the Blackwater guards, insist the convoy was attacked before the protective detail opened fire while Iraqi witnesses say the gunshots were unprovoked.

A joint U.S.-Iraqi commission is working on a common set of facts about the incident and look at ways to clarify the regulations under which private security guards operate in Iraq.

Kennedy's review will look beyond the Sept. 16 incident to assess what general changes may be required in the State Department's security program, including rules of engagement that govern contractors.