The EU foreign policy chief said Saturday that deadly suicide attacks could not be allowed to break the international community's resolve in Afghanistan. 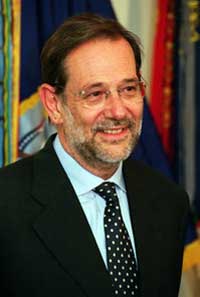 "I think that the situation in Afghanistan in general terms ... is going in a constructive manner," Solana told reporters. "We would like it to go faster, no doubt about that. But we have to remain steadfast because it's a theater (of operations) we cannot abandon."

Solana was at a meeting of EU defense ministers in southern Portugal where officials were to review the bloc's police training mission in Afghanistan.

The EU launched the mission in June to supplement 500 American experts in the country training the Afghan police.

However, EU officials admit the bloc has struggled to find personnel for the operation and that the size of the mission has fallen short of expectations. A U.N. envoy last week welcomed the EU's commitment of 160-180 police mentors, but said "we need 2,000 more." Only 75 EU personnel are in the country.

"I think that the EU is doing its utmost," Solana said. "It's not that important the number because we are not going to train every policeman in the country."