Georgia, South Ossetia blame each other for shooting 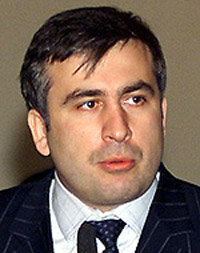 Georgia, South Ossetia blame each other for shooting

"That was a deliberate attack," Kurashvili told The Associated Press. "The Georgian side was forced to open retaliatory fire."

Georgian officials did not mention any casualties, but Irina Gagloyeva, a spokeswoman for separatist authorities in South Ossetia, said at least two people were wounded by the Georgian shelling in Tskinvali, the province's main city. She said the Georgian forces had fired first and that the province's military retaliated.

Marat Kulakhmetov, the commander of Russian peacekeepers in the area, said on Russian television that it was not immediately clear who had fired first.

South Ossetia is now dotted by ethnic Ossetian and ethnic Georgian villages like a chessboard. Settlements are closely guarded by separatist forces and Georgian police, and shooting breaks out sporadically.

Abkhazia, another separatist province, said Thursday it had sent reinforcements to the border with Georgia in response to skirmishes in South Ossetia. Sergei Bagapsh, Abkhazia's separatist president, said an additional 200 police were sent to a buffer zone along the Inguri river.

South Ossetia and Abkhazia defeated the Georgian government forces during separatist wars in the early 1990s and have been running their own affairs ever since, developing close ties with Moscow. Russian peacekeepers have been deployed to both breakaway provinces, but Georgia has accused them of favoring the separatists and attempts to negotiate political solutions have failed.

Georgian President Mikhail Saakashvili has repeatedly vowed to bring the two regions back under government control and has aggressively pushed his nation to seek membership in NATO and the European Union - the policy that set him on a collision course with Moscow.

Speaking to the United Nations General Assembly in New York on Wednesday, Saakashvili accused Russia of interference in Georgia's domestic politics and "reckless and dangerous" behavior. He claimed that Russia had tried to skew reports of an incident last week in the breakaway region of Abkhazia in which Georgian forces killed two Russian military officials.

Russia's ambassador to the U.N., Vitaly Churkin, told reporters that the men were instructors at an "anti-terrorist training center" and were killed Sept. 20 by knife wounds and gunshots to the head. Churkin said he had raised the matter in Security Council consultations earlier Wednesday.