On a southern Afghan highway two tour buses collided head-on at high speed, killing about 40 people on board. 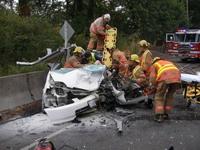 The crash killed about 15 women and children, along with 25 men, said Jalali Khan, the Zabul province highway commander. The crash occurred on Afghanistan's main Kabul-Kandahar highway near the border area between Ghazni and Zabul provinces, he said.

"There's no speed limit for these buses, and they wanted to reach their destinations as soon as possible," Khan said. "They're careless drivers, and someone made a mistake. Around 40 people died because of these careless drivers."

Both drivers died in the crash, Khan said.

Afghanistan's highways are patrolled by very few police, and speed limits generally do not exist. Police checkpoints are set up along the highway but are there to provide security from Taliban militants or to search for weapons or drug smugglers, not to enforce basic traffic safety laws.

The crash occurred only an hour before sundown, when Afghans in this Muslim country would be allowed to eat and drink for the first time since before sunrise. Muslims observing the holy month of Ramadan do not eat or drink during the day during the religious period.