Indian police on Monday arrested three people for allegedly drugging and raping two Japanese female tourists in the northern city that is home to the Taj Mahal. 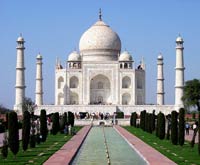 The arrests came a day after the Japanese women filed a complaint in New Delhi before flying back home.

Two of the suspects owned jewelry shops and the third acted as a tour guide in Agra, according to R. K. Sharma, a police officer investigating the case.

The suspects met the Japanese women at a restaurant in Agra and offered them cheap hotel accommodations, the Hindustan Times newspaper reported.

The women, in their early 20s, said they were slipped a drug, taken to an unknown location, and repeatedly raped over a two-day period.

The victims were later freed by their captors and they left India on Sunday, Bhagat said. The tourists provided police with photographs of the accused.

Rape and illegal detention are punishable with life imprisonment in India, Bhagat said.