Army officials reports two bombs ripped through a Pakistani army bus near the capital Tuesday, killing at least 24 people and injuring 66 others. 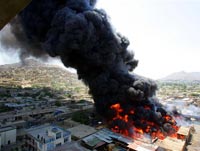 There was no immediate claim of responsibility for the explosions, which deepened the sense of crisis in Pakistan amid political uncertainty ahead of elections. Officials suggested the bombings were the work of Islamic militants, possibly in response to Pakistani military operations near the Afghan border.

The first bomb exploded on the bus early Tuesday morning as it traveled through a high-security area of Rawalpindi, a garrison city just south of Islamabad and the headquarters of the army.

Military spokesman Maj. Gen. Waheed Arshad said the bus belonged to the Defense Ministry, and police said many of the victims were soldiers.

Television pictures showed how the blast had ripped the roof off the white bus and blown out all the windows.

As ambulances transported victims from the bus blast, a second bomb triggered on a motorcycle went off in a nearby commercial district, killing several more people, said Zainul Haq, a city police official. Two military caps were visible inside one of several cars badly damaged in the second explosion.

Arshad, speaking on Geo television, said a total of 24 people had died and 66 more were wounded. He said it was unclear if suicide attackers were involved.

Officials said it was too early to say who was responsible for the blasts.

However, Religious Affairs Minister Ejaz-ul Haq said they could be a reaction to the war in Afghanistan and Pakistani operations in militant strongholds areas near the Afghan frontier.

"This is all probably because of the situation presently in Afghanistan and in Waziristan," a tribally governed area where troops are battling militants, Haq said on Dawn News televisions. "We are the frontline state in the war against terror, and we are suffering the most."

Pakistan has witnessed scores of bombings and other acts of terrorism since siding with the United States after the Sept. 11, 2001 attacks. Officials have blamed pro-Taliban and al-Qaida elements for much of the violence.