Papua New Guinea police and health workers were investigating unverified claims by an HIV-positive woman that people with AIDS were buried alive by their relatives who could no longer care for them, an official said Tuesday. 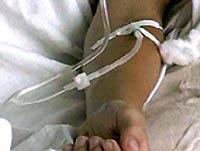 "I saw three people with my own eyes," Marabe told the Post Courier newspaper for its Monday edition. "When they got very sick and people could not look after them, they buried them."

The acting director of Papua New Guinea's National AIDS Council, Romanus Pakure, said police and health workers were being sent to the Southern Highlands to investigate the claims.

However, he questioned why Marabe had not approached the police before taking her story to the media.

"The lady may be a loose cannon; we are not happy it's come out like this," he said.

Pakure conceded that the stigma against people with HIV was very strong in the countryside, where education about the disease is scarce.

Similar claims of AIDS killings have been made in the past but none were verified, he said.

The council and other health agencies were moving ahead with programs to raise knowledge about HIV/AIDS and teach families how to care for people with the disease, Pakure said.

Anne McPherson, a spokeswoman for the organization where Marabe works as a volunteer, said she had not heard of Marabe's claims before they appeared in the local newspaper.

Papua New Guinea, which shares an island north of Australia with Indonesia's easternmost Papua province, is among the hardest-hit countries in the Asia-Pacific region.

Officials have estimated that the adult per capita infection rate lies between 1.28 percent and 2 percent, and have warned that some isolated pockets of the country face HIV rates as high as 30 percent.