Philippine police discover another bomb on a passenger bus 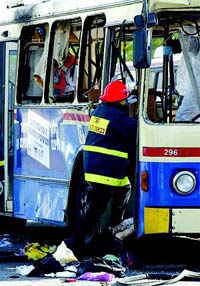 Philippine police discover another bomb on a passenger bus

The bomb, staged amid already-tight security in the city, may have been set off by the al-Qaida-linked Abu Sayyaf group to divert the military's focus from the offensives on nearby Jolo and Basilan islands, Barcena said.

Later Tuesday, police found another device on a bus after its passengers disembarked at a crowded terminal in Pagadian city in nearby Zamboanga del Sur province, city police chief Oscar Buenaobra said.

The bomb, hidden in a powdered milk can, was found 15 minutes before it was set to explode, and an army ordnance team defused it, Buenaobra said.

The bomb was timed to explode at midnight, when the bus was scheduled to arrive at the terminal. The bus driver may have saved lives by arriving early, the police chief said.

"The bomb was supposed to blow up in transit but the driver drove fast. Thanks, God," Buenaobra told The Associated Press by telephone from Pagadian, about 780 kilometers (487 miles) southeast of Manila.