Philippine police found a bomb on a passenger bus in the south of  the country. The device was neutralized only 15 minutes before it was timed to explode and just hours after a blast in the territory injured at least 14 people, officials said Wednesday. 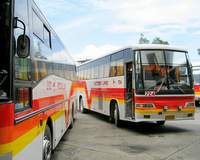 A time bomb hidden under a concrete bench exploded in a crowded square in Zamboanga city late Tuesday, wounding at least 14 people. The bomb, staged amid already-tight security in the city, may have been set off by the al-Qaida-linked Abu Sayyaf group to divert the military's focus from the offensives on nearby Jolo and Basilan islands.

Later Tuesday, police found another bomb on a bus after its passengers disembarked at a crowded terminal in Pagadian city in nearby Zamboanga del Sur province, city police chief Oscar Buenaobra said.

The bomb, hidden in a powdered milk can, was found 15 minutes before it was set to explode, and an army ordnance team defused it, Buenaobra said.

The bomb was timed to explode at midnight, when the bus was scheduled to arrive at the terminal. The bus driver may have saved lives by arriving early, the police chief said.

"The bomb was supposed to blow up in transit but the driver drove fast. Thanks, God," Buenaobra told The Associated Press by telephone from Pagadian, about 780 kilometers (487 miles) southeast of Manila.

He would not immediately speculate on who planted the bomb, but said Muslim rebels had been suspected in an attack on a public market in Pagadian last year.

A security official said the bomb that went off in Zamboanga's Pershing Square late Tuesday resembled those used by Muslim rebel groups, including the Abu Sayyaf. The official spoke on condition of anonymity because he was not authorized to talk to the media.

The two incidents heightened security concerns in Jolo and Basilan where the military has renewed an offensive against the Abu Sayyaf. At least 56 troops and scores of militants have died in three key battles on the islands since last month.

President Gloria Macapagal Arroyo warned Tuesday that the offensives could spark terror attacks and ordered the military and police to bolster security around the country.

The military launched its latest offensive against the Abu Sayyaf, notorious for deadly bombings, beheadings and ransom kidnappings, after the group was implicated in the July 10 beheadings of 10 marines in Basilan's Al-Barka township.

The U.S. government has blacklisted the group as a terrorist organization.