Authorities lowered the death toll from an interstate bridge collapse to four Thursday, but warned the final number could change as divers search the Mississippi River. 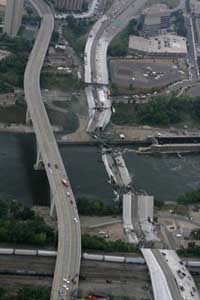 Police Lt. Amelia Huffman said: "This morning, the medical examiner's office only has four sets of remains." Initial reports of seven people killed were based on the best estimates authorities had Wednesday night, she said.

The eight-lane Interstate 35W bridge, a major Minneapolis artery, was in the midst of being repaired and two lanes in each direction were closed when the bridge buckled during evening rush hour Wednesday.

More than 20 families gathered in a hotel ballroom early Thursday, waiting for word on loved ones who could not be located.

"I've never wanted to see my brother so much in my life," said Kristi Foster, who went to an information center set up at a Holiday Inn looking for her brother Kirk. She had not had contact with her brother or his girlfriend, Krystle Webb, since the previous night.

More than 60 people were injured and as many as 50 vehicles were in the river, many of their occupants having scrambled to shore. The collapse did not appear to be terrorism-related.

Some injured people were carried up the riverbank, while emergency workers tended to others on the ground and some jumped into the water to look for survivors. Fire and black smoke rose from the wreckage.

Minneapolis Fire Chief Jim Clack said the death toll could rise. "We think there are several more vehicles in the river we can't see yet," he said Wednesday.

Gov. Tim Pawlenty said the bridge was inspected by the Minnesota Department of Transportation in 2005 and 2006 and that no immediate structural problems were noted. "There were some minor things that needed attention," he said.

"They notified us from an engineering standpoint the deck might need to be rehabilitated or replaced in 2020 or beyond," Pawlenty said Wednesday.

The 40-year-old bridge was rated as "structurally deficient" two years ago and possibly in need of replacement, the Star Tribune reported. The newspaper said that rating was contained in the U.S. Department of Transportation's National Bridge Inventory database.

"We've seen it, and we are very familiar with it," Jeanne Aamodt, a spokeswoman for the Minnesota Department of Transportation, said of the 2005 assessment of the bridge.

Aamodt noted that many other bridges around the country carry the same designation that the I-35W bridge received. She declined to say what the agency was going to do to address the deficiencies found in 2005.

Road crews were working on the bridge's joints, guardrails and lights this week, with lane closures overnight on Tuesday and Wednesday. The bridge was fitted in 2001 with a computerized anti-icing system that sprayed chemicals on the surface during winter weather, according to documents posted on the Minnesota Department of Transportation's Web site.

There were 18 construction workers on the bridge at the time of the collapse, said Tom Sloan, head of the bridge division for Progressive Contractors Inc., in St. Michael. One of the workers was unaccounted for.

Sloan said his crew was placing concrete finish on the bridge for what he called a routine resurfacing project. "It was the final item on this phase of the project. Suddenly the bridge gave way," he said.

The entire span of Interstate 35W crumpled into the river below. Some injured people were carried up the riverbank, while emergency workers tended to others on the ground.

A school bus had crossed the bridge before it collapsed. The bus did not go into the water, and broadcast reports indicated the children on the bus exited out the back door.

Christine Swift's 10-year-old daughter, Kaleigh, was on the bus, returning from a field trip. She said her daughter called her about 6:10 p.m.

"She was screaming, 'The bridge collapsed,"' Swift said. All the kids got off the bus safely, but about 10 of the children were injured, officials said.

U.S. Senator Norm Coleman of Minnesota said he spoke with Transportation Secretary Mary Peters, and that both of them along with Minnesota's other senator. Amy Klobuchar, will be flying to Minneapolis early Thursday.

The collapsed bridge stood just blocks from the heart of Minneapolis, near tourist attractions like the new Guthrie Theater and the Stone Arch Bridge. As the steamy night progressed massive crowds of onlookers circulated in the area on foot or bicycle, some of whom had attended Wednesday night's baseball game at the nearby Metrodome early.

Thursday's game between the Twins and Kansas City Royals was called off, but the Twins - Minneapolis' team - decided to go ahead with Wednesday's rather than sending about 25,000 fans back out onto the congested highways. Inside the stadium, there was a moment of silence to honor victims.

The steel-arched bridge, which was built in 1967, rose about 64 feet (19.5 meters) above the river and stretched about 1,900 feet (580 meters) across the water. The bridge was built with a single 458-foot-long (140-meter-long) steel arch to avoid putting any piers in the water that might interfere with river navigation.

The river's depth at the bridge was not immediately available, but the U.S. Army Corps of Engineers maintains a channel depth of at least 9 feet (2.74 meters) in the Upper Mississippi from Minneapolis southward to allow for barge and other river traffic. The site is just downstream from the St. Anthony Falls locks and dams.