Gunmen abducted an Italian Roman Catholic priest in the southern Philippines who was on his way to a remote village to celebrate Mass. 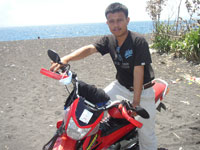 "He was kidnapped this morning," Cristobal said. "He was on board his motorcycle on his way to another village to conduct Mass when an armed group blocked his path."

Cristobal said he suspected Moro Islamic Liberation Front rebels who operate in Zamboanga Sibugay, despite a cease-fire agreement with the government. He did not elaborate, but said that al-Qaida-linked Abu Sayyaf guerrillas, notorious for ransom kidnappings, are not known to be active in the area.

Police and the military were conducting a joint search for the priest with land and coastal patrols, he added.

Bossi who hails from the Italian city of Milan was assigned as parish priest of Payao in April and is a member of the Pontificio Instituto Missioni Estere, Cristobal said.

Sundalo Jianni, an official from the mission, appealed to Bossi's abductors to free him.

"Father Bossi is a good man and there is no reason to hold him against his will," he told the local Mindanao Examiner newspaper.

The volatile south is home to several armed groups, including militants, communist rebels and crime gangs.

In 2001, the criminal Pentagon group, which is on a U.S. list of terrorist organizations, abducted an Italian missionary who was rescued several months later. Several other Filipino and foreign Catholic priests have been targeted in the past.