Attacks in Ethiopia, at least 16 people killed and 67 injured 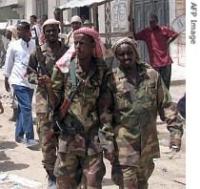 Attacks in Ethiopia, at least 16 people killed and 67 injured

At least 16 people were killed and 67 injured in two attacks in eastern Ethiopia.

Earlier, a rebel of the Ogaden National Liberation Front threw a grenade during a national day ceremony in Jijiga, injuring the president of the Somali Regional State, Abdullahi Hassan, said an adviser to Prime Minister Meles Zenawi, Bereket Simon.

Abdullahi had a minor leg injury, was treated and has been discharged from hospital, said Nur. He said that three other unexploded devices were found in Jijiga but said he had no other details.

Nur also said he had no other details about the attack in Degah Abur.