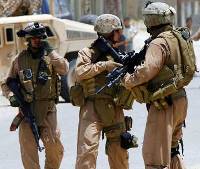 Two American soldiers were killed when explosions hit their patrols.

A Task Force Lightning soldier was killed in an explosion near his vehicle in Diyala Province, and a Multi-National Division-Baghdad soldier died in a roadside bombing in western Baghdad. Both soldiers died Saturday, the military said.

Their deaths raised to at least 102 the number of American troops who have died in the first 26 days of May, an average of nearly 4 U.S. deaths a day. At that pace, 122 troops will have died by the end of the month, the most since 137 soldiers were killed in November 2004, when U.S. troops were fighting insurgents in Fallujah.