Teenage boy dead after being shot at Toronto high school

A 15-year-old student was shot and killed at a Toronto high school, forcing frightened teens to stay in their locked-down classrooms for hours as police searched the place into the evening. 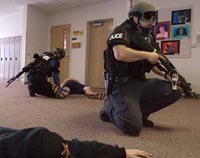 Teenage boy dead after being shot at Toronto high school

Police said it was not a situation in which a gunman was roaming the halls, but were not able to provide any information about the shooter. The students finally were released just before 6 p.m. (2200 GMT), more than three hours after the lockdown.

The afternoon shooting at C.W. Jefferys Collegiate Institute follows eight school bomb scares last week in a country that prides itself on its low crime rate.

"Students have a right to a safe school environment. It is shocking that such a crime could take place in our schools," Toronto Police Chief Bill Blair told a news conference Wednesday evening.

With students still locked down in their classrooms, Blair offered assurances to worried parents, saying officers had secured the school and were "on every floor and in every room."

Once released, students would be taken to another nearby school before they would be free to go home, Blair said.

After police received a call about a possible drowning at the school, they arrived to find the victim in grave condition from a gunshot wound. He later died at a hospital.

He was identified by friends as Jordan Manners.

The Toronto Star reported that witnesses said there was a fight outside the school, and then the shooter followed the victim inside, where he was shot

"We don't have anybody under arrest and we don't have suspect information, so we have to take that into consideration," said Toronto police Const. Wendy Drummond. "Until we can search the building, we don't know."

Police said no weapon had been found.

Toronto Mayor David Miller said the incident highlights the need to crack down on gun crimes in the city.

"Handguns have one purpose, and that is to kill, and it really reinforces what we've been saying for quite a while at the city," Miller told TV station CP24. "We absolutely have to get the guns off the streets. It's going to require some changes to our laws, but it has to be done."

The school is located near a poor area of Toronto noted for years for its high crime rate.

The shooting comes a little more than a month after a gunman killed 32 people on the campus of Virginia Tech, an American university, before taking his own life.

In September, a gunman at Montreal's Dawson College killed a student and wounded 19 others before he died from police gunfire.