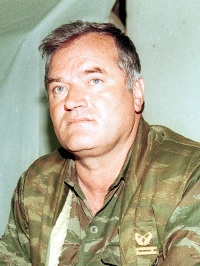 The placards, reading "Boulevard of Ratko Mladic," were plastered Tuesday along a main Belgrade avenue that is to be named after slain reformist Prime Minister Zoran Djindjic.

The appearance of the pro-Mladic placards, which happens from time to time, is a signal that the fugitive former commander still enjoys support in Serbia.

Mladic has been on the run since 1995, when he was charged with orchestrating the massacre of up to 8,000 Muslim boys and men in the Bosnian town of Srebrenica Europe's worst carnage since World War II.

Officials at the U.N. war crimes tribunal for the former Yugoslavia, based in The Hague, Netherlands, insist that Mladic is hiding in Serbia. Earlier this week, Serbian Prime Minister Vojislav Kostunica announced increased efforts to catch the general.

Serbian police said Wednesday that they have arrested one man in connection with the pro-Mladic placards, and are working to identify and detain other suspects from a little-known nationalist group.

An ultranationalist politician defended Mladic as a Serbian hero on Wednesday and criticized pro-Western authorities for their action against the Mladic supporters.

"You will never catch general Mladic," Aleksandar Vucic shouted during a parliamentary debate.

Djindjic's killers were found guilty by a special court on Wednesday and sentenced to up to 40 years in prison.