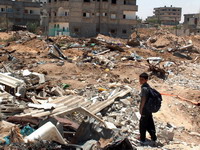 In a text message, the Hamas military wing said it fired 23 rockets Monday, of which 9 were at Sderot.

The most lethal killed an Israeli woman, the first Israeli death in the current round of fighting.