Police stormed an Idaho church where a shooter hid after wounding three in a courthouse ambush, finding the body of the likely gunman and another man. 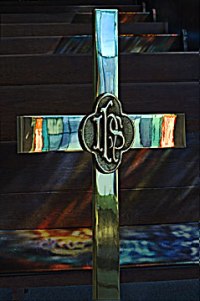 The shooting began late Saturday and wounded two officers and a civilian, said David Duke, Moscow's assistant police chief. Duke said the shooter fired into the Latah County Courthouse to lure people into the line of fire. A total of 75 shots were fired, he said.

Three elite police teams entered the First Presbyterian Church early Sunday and found the two bodies in separate rooms on the main floor, Duke said. A semiautomatic rifle, ammunition and spent shells were found with one of the men.

"We believe one of those is our shooter," Duke said. Authorities did not know their identities.

Police did not know the shooter's motive and did not believe he had a specific target in mind, Duke said.

More than 30 bullets struck the courthouse shortly after 11 p.m. Saturday, ripping through the dispatch center, Duke said. No one was injured, and officers rushed outside.

"Whoever the shooter is wanted to draw people to the courthouse," Duke said. "When officers responded, he did open fire on them."

A Moscow police officer was shot first, followed by a Latah County sheriff's deputy who came to his aid. The civilian was struck after that, Duke said. Their conditions were not revealed.

"He was just shooting at anybody he could," Duke said. "We believe the shots were from a high area, based on where the victims were shot."

Officers surrounded the church, which is across the street from the courthouse. A final shot was heard from inside the church about 1 a.m. Sunday, Duke said.

Duke would not say if the shooter committed suicide.

Streets in the area had been barricaded, and residents had been told to stay inside their homes.