Yolanda King, the Rev. Martin Luther King Jr.'s eldest child who pursued her father's dream of racial harmony has died. She was 51 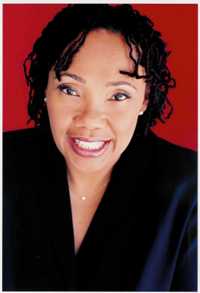 Klein said the family did not know the cause of death but think it might have been a heart problem.

"She was an actress, author, producer, advocate for peace and nonviolence, who was known and loved for her motivational and inspirational contributions to society," the King family said in a statement.

Former Mayor Andrew Young, a lieutenant of her father's who has remained close to the family, said Yolanda King had just spoken at an event for the American Heart Association. She was helping the association raise awareness, especially among blacks, about stroke.

Young said she was going to her brother Dexter's home when she collapsed in the doorway and "they were not able to revive her."

Born on Nov. 17, 1955, in Montgomery, Alabama, King was just an infant when her home was bombed during the turbulent civil rights era.

As an actress, she appeared in numerous films, including "Ghosts of Mississippi," and even played civil rights heroine Rosa Parks in the 1978 miniseries "King."

One of her father's close aides in the civil rights movement, the Rev. Joseph Lowery, said Wednesday he was stunned and saddened by the news of King's death.

"Yolanda was lovely. She wore the mantle of princess, and she wore it with dignity and charm," Lowery said. "She was a warm and gentle person and was thoroughly committed to the movement and found her own means of expressing that commitment through drama."

The Rev. Al Sharpton, a black political leader, said he expressed his condolences to her brother Martin Luther King III on Wednesday. Sharpton said Yolanda King was a "torch bearer for her parents and a committed activist in her own right."

"Yolanda never wavered from a commitment to nonviolent social change and justice for all," he said. "She was the first daughter of the civil rights movement and never shamed her parents or her co-activists."

Yolanda King was the founder and head of Higher Ground Productions, billed as a "gateway for inner peace, unity and global transformation." On her company's Web site, King described her mission as encouraging personal growth and positive social change.

King was also an author and advocate for peace and nonviolence, and held memberships in the Southern Christian Leadership Conference _ which her father co-founded in 1957 _ and the National Association for the Advancement of Colored People. Her mother, Coretta Scott King, died last year.

Yolanda King is survived by her sister, the Rev. Bernice A. King; two brothers, Martin Luther King III and Dexter Scott King; and an extended family.

Funeral arrangements would be announced later, the family said in a statement.

Yolanda King was the most visible and outspoken among the Kings' four children during activities honoring this year's Martin Luther King Day in January, the first since Coretta Scott King's death.

At her father's former Atlanta church, Ebenezer Baptist, she performed a series of one-actor skits that told stories including a girl's first ride on a desegregated bus and a college student's recollection of the 1963 desegregation of Birmingham, Alabama.

She also urged the audience at Ebenezer to be a force for peace and love, and to use the King holiday each year in January to ask tough questions about their own beliefs on prejudice.

"We must keep reaching across the table and, in the tradition of Martin Luther King Jr. and Coretta Scott King, feed each other," King said.

A flag at The King Center, which King's mother founded in 1968 and where she was a board member, was lowered to half-staff on Wednesday.