Health authorities ordered two types of toothpaste pulled from shelves for they contain a chemical that killed at least 51 people in the Central American country last year. 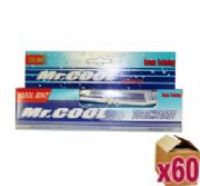 Health Minister Camilo Alleyne said the toothpastes were being pulled from shelves and the government issued a warning to the public against using brands "Excel" and "Mr. Cool," whose labels said they contained the chemical diethylene glycol. Company officials could not be immediately reached for comment Friday.

Authorities were conducting lab tests to confirm whether the products, which officials said were contraband because they were not registered, contained the chemical and expected to have results by the weekend, Alleyne said.

Chinese Foreign Ministry spokeswoman Jiang Yu said this week that an investigation into the source of the deadly medicine found that the Chinese company that sold it was authorized to sell only chemicals for industrial use.

The contaminated medicine was in cough syrup, antihistamine tablets, calamine lotion and rash ointment made in a Panama government laboratory.

The New York Times newspaper said in an investigative report published Sunday that China's Taixing Glycerine Factory made the diethylene glycol and fraudulently passed it off as 99.5 percent pure glycerin to a Spanish company, Rasfer International, which in turn sold it to Panama's Medicom SA. Medicom then sold it to a government laboratory.

Taixing's Web site says it sells industrial glycerine for use in such things as cosmetics, toothpastes and printing ink. Company officials could not be reached for comment.

Glycerin, which is often processed from animal fats and occurs naturally in the human body, is a sweet liquid that can give cough syrup and other remedies thickness while preventing them from dissolving in water. It is used in many kinds of medicines all over the world.

The first documented poisonings were reported in October, but Panamanian authorities said there may have been earlier cases that went undetected. Fifty-one people died after taking the tainted medications and 68 were hospitalized.