Ten people were injured when Muslims and Christians clashed in a village south of the Egyptian capital. 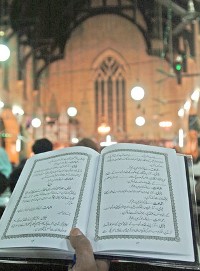 The violence erupted when Muslim residents of Bamha village, some 40 kilometers (24 miles) south of Cairo, objected to suspected efforts by Christians to build a church on a piece of public land next to the town mosque, according to a Cairo police officer who spoke on customary condition of anonymity.

Residents fought with their hands and also threw sticks, stones and Molotov cocktails before police and security forces restored order to the scene, arresting 15 people, the official reported. He said three houses were burnt down and 20 shops were damaged in the melee.

Coptic Christians make up an estimated 10 percent of Egypt's 76.5 million people. They generally live in peace with the Muslim majority, though occasional clashes have occurred.

Last year, Muslim militants attacked churches in the Mediterranean city of Alexandria in a protest against the distribution of a DVD they deemed offensive to Islam. Four people were killed during the riots.

Christians complain that they suffer job discrimination, particularly in the high ranks of the civil service, where positions such as general, provincial governor and faculty head are almost invariably held by Muslims.