A Taliban commander on said the militant group had kidnapped the spokesman for a provincial governor. 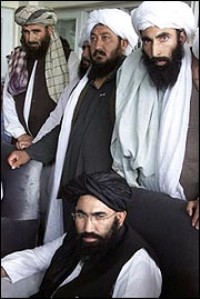 Taliban commander Mullah Abdul Bari said the group had kidnapped Uruzgan governor spokesman Qayum Qayumi while he was traveling in a vehicle near Tirin Kot, the provincial capital of the southern province.

In Helmand province, meanwhile, Afghan civilians fought with Taliban militants who had attacked a checkpoint near Sangin on Wednesday, leaving three of the militants dead, the Interior Ministry said.

Sangin was the site of a major battle between U.S. Special Forces and more than 200 militants on Tuesday, a fight that killed 21 civilians after airstrikes were called in, the provincial governor said.

The U.S.-led coalition said a "significant" number of militants were killed in the battle but did not say how many. American and Afghan forces fought through three ambushes during the fight, the coalition said.

Gov. Assadullah Wafa said on Thursday that a team of Afghan investigators was heading to the site of the bombings but that the civilian death toll remained at 21.

More than 1,300 people, mostly militants, have died in insurgency related violence this year, according to an Associated Press count based on U.S., NATO and Afghan officials.