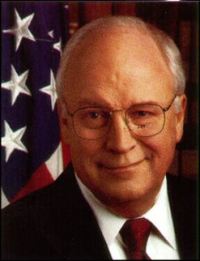 As U.S. Troops stationed near Saddam Hussein’s hometown were saluted by vice president Dick Cheney who defended the decision of George W. Bush to extent military deployments as “vital to mission”.

"The Army and the country appreciate the extra burden you carry," Cheney said.

He vowed to "stay on the offensive" despite growing public opposition in the United States to the war and efforts by the Democratic majority in Congress to restrict spending.

Cheney, who was defense secretary in the first Bush administration, spent the night on the base, about seven miles from Tikrit, Saddam's former hometown and an area populated mostly by minority-party Sunnis.

Cheney had breakfast with troops and participated in classified briefings from military commanders.

"It was a good report and I come away with even more appreciation for all you do, and greater confidence for the days ahead," Cheney said,

Between 10,000 and 12,000 troops are stationed at the base, which is located on the grounds of the former Iraqi Air Force Academy and is about 100 miles north of Baghdad, where Cheney spent Wednesday.

It was the first time Cheney spent the night in Iraq, and his whereabouts was closely guarded by the White House until Thursday's speech to the troops.

Cheney spoke to several thousand mostly Army forces in a huge tent that is scheduled to be a gymnasium. He was enthusiastically cheered and greeted when he stepped up on stage, but only politely applauded when he talked about deployment extensions.

He was headed next for the United Arab Emirates on a weeklong tour of the Middle East that will also take him to Saudi Arabia, Egypt and Jordan.

"Extremists from inside and outside the country want to stir an endless cycle of violence, and al-Qaida is operating and trying to open new fronts," Cheney said. "Some seem to have no interest in seeing the emergence of a strong, secure and democratic Iraq.

"A violent minority is trying to tear down the institutions of peaceful self-government that Iraqis are trying to build," he said.

The president recently increased military deployments from 12 months to 15 months. That meant a blanket three-month extension for nearly every one on the base, said Maj. Tage Rainsford, a public affairs officer on the base.

Said Cheney: "Many of you have had your deployments extended and that puts unexpected hardship on you and your families. I want you to know the extension is vital to the mission."

Cheney visited to Iraq to assess the impact of the president's decision to send roughly 30,000 additional troops to Iraq to help stabilize the country, especially around Baghdad. In meetings with Iraqi leaders on Wednesday, he also pressed for Iraq to do more to reconcile tensions among rival Shiite and Sunni factions.

Success on the path to reconciliation, progress and peace, Cheney told the troops, "depends on Iraq's leaders themselves, and the ultimate solution in this country will be a political solution."

"But that requires basic security, especially in Baghdad, where Americans are working beside Iraqi forces to carry out our new strategy."

Cheney was not upbeat, giving a grim assessment of the war being waged, citing comments by Gen. David Petraeus, the chief U.S. commander in Iraq, who was with him.

"General Petraeus has underscored the fact that enemy tactics are barbaric ... that we can expect more violence as they try to destroy the hopes of the Iraqi people," Cheney said. But he cited some progress in terms of battling al-Qaida, seizing weapons and getting improved intelligence.

Gen. Benjamin R. (Randy) Mixon, commander of coalition forces in northern Iraq, told reporters that since President Bush announced his military buildup earlier this year, some al-Qaida and other militants have migrated from Baghdad to other areas of Iraq, including some in northern areas under his command.

As to the extensions of duty on troops at Camp Speicher, Mixon said, "They understand perfectly the reason the mission's been extended. The morale is good, in terms of staying focused on the mission. They want to know the exact day their going back. That gives them something to focus on."

"This budget battle has been particularly frustrating to us," Mixon said of congressional efforts to set timetables for troop withdrawals.

"We cannot stay here forever, we all know that," he said. He said the solution to the problem is to keep training the Iraqi army and police.

Specialist Eric Emo, 23, of Sedalia, Mo., whose Army unit is based in Fort Riley, Kan., said most of his fellow soldiers are unhappy about the deployment extensions, but understand the need for it.

In terms of hostile activity, he said, "conditions around here have gotten a lot worse." He said there has been a particularly sharp increase in the number of roadside bombs.